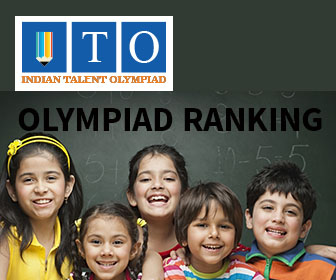 The Olympiad Ranking of the students is a mathematical analysis of their academic scores compared to the scores of other students. The Ranking for Olympiad exams is determined considering the scores of both rounds. The scores are converted into ranks. The Olympiad Ranking criteria are well described by the Indian Talent Olympiad. The student is eligible to perceive rank when he/she fits into the ranking criteria. There are amazing prizes for the first 4 rank holders. The ranking is determined by the grading system.

- Top 20% of students, class-wise who appear for the 1st level exam. Due priority to marks scored in different sections will be given.

- Class topper, where at least 10 students from a class appear in the exam, & scores at least 50% marks. In the case of section-wise registrations, Class toppers will be from each section where participation in each section exceeds 25 nos. (For School Registered Students)

2nd level exam will be held for Science, Mathematics, English, and for General Knowledge for students from class 1 to 10. Incase two or more students score the same total marks, ranks will be awarded to students scoring higher marks in sections accorded higher priority, as under.

In case two or more students score equally in all sections, they will be accorded the same rank & the scholarship amount will be shared among students.

- The queries related to Question Papers, OMR Answer sheet re-checking & marks re-evaluation will be entertained within only 20 days after the result is declared. Indian Talent Olympiad will not entertain any such queries after the same.

2. Providing OMR answer sheet soft copy, re-checking & re-evaluation is allowed for the first round only.

3. Since in the 2nd Round only a few thousand students are selected, their OMR Answer sheets are scanned in OMR Machine twice to eliminate any possibility of an error. For the same reason, the answer sheets will not be scanned again for re-checking or re-evaluation purposes nor the soft copy will be provided for the same. Any queries regarding the same will not be entertained.

In case of level 2 exams, ranks will be accorded on the following -

State Rank 1 to 10: Scholarships will be awarded.

State Rank 11 to 25: Excellence Medal Award will be awarded. (For School Registered Students)

In case two or more students score the same number of marks, ranks will be determined on the following criteria:
a. Marks scored in Sections in the exam accorded higher priority.

b. Time Taken to complete the exam will accord Higher priority.

c. If the situation demands, negative marking (0.25) will be there as a tie-breaker.

d. For Tough Ties, ITO has Provided some questions internal marking ratio. In a very close call, the same ratio will be applicable in evaluation.

e. At any point in time, ITO is not liable to provide anyone internal marking details. It is a confidential evaluation process.

f. Only Ranks will be shown in the Results, as percentage/Pass OR Fail is not applicable.

g. In case two or more students score the same marks under all the categories above, they will be awarded the same rank & the scholarship amount will be shared among students.

b. The National Scholarship is aimed to provide Educational Benefits to extraordinary performing students. For the same reason, the Indian Talent Management has set policies to split the National Rank Scholarships in certain years.

What Are The Criteria For Ranking?